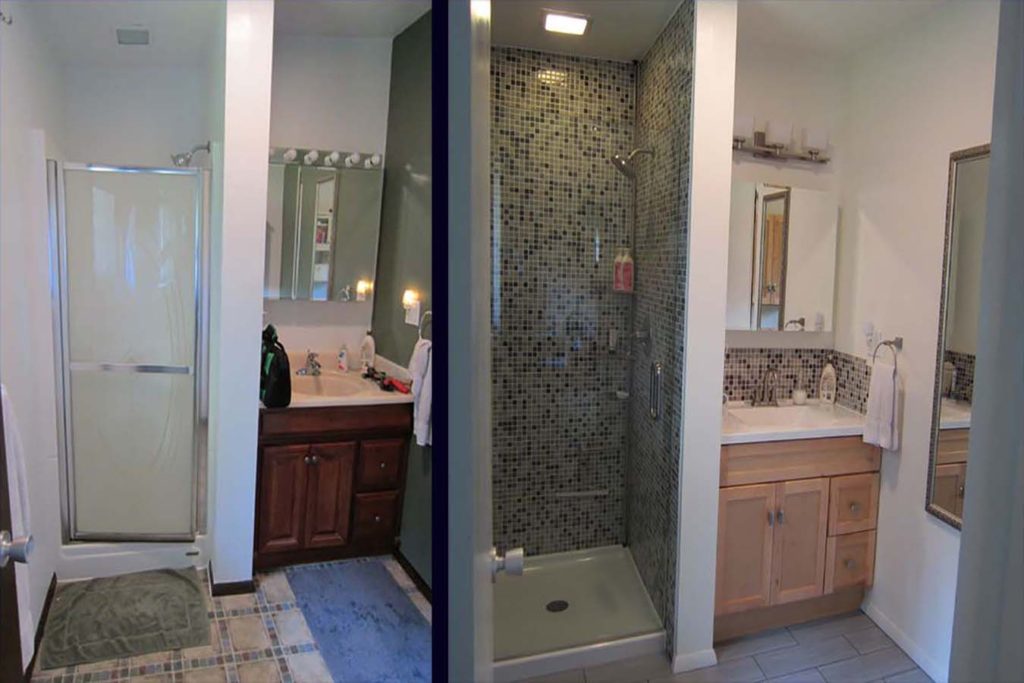 The brief here was to keep price to a minimum by not changing any plumbing on adding underfloor heating or pulling up the floor boards. Instead new items would be fitted in the same places, so minimum changes to the plumbing were required, stud-work was left where as it was. New tiling was required to make the feel more modern and that basically is all that is needed to face lift and old bathroom and make it feel nice and fresh once more!

Access to the waste trap was available from the cellar room below, as this shower room was on the ground floor. This made the job nice and easy. The waste pipe work for the shower was below floor level, which made it seem rather strange why it was originally a high level tray? As a result we installed a low level tray with the minimum of fuss and no work hardly at all to the pipe work. Simple!

The main expense being on the tiling, with the use of a large amount of mosaic. The cost of mosaic per meter squared is a lot more than standard tiles but the look is very impressive. Saving money on not having underfloor heating and moving pipe work, yet spending a little more on mosaics, can have a very beneficial overall effect! Modern basin and units were fitted, to replace the out of date very dark wood unit there previously. A mosaics splash back round the sink, modern floor tile design laid in a brick bond style and dark blue feature wall all finish off this modern design nicely. Although the walls only ever had mosaic tile, no normal tiles at all, only the minimum areas were tiled. Inside the shower area and around the basin as splash back. Again, cost kept down but stunning results achieved.

One last touch to bring the 80’s shower room into the 21st century was to bin the old metal frame shower door and replace it with a new, more modern, entirely glass version, the only metal being the chrome hinges.

Out dated shower room, transformed for mimimal cost, resulting in a modern look and a happy customer!