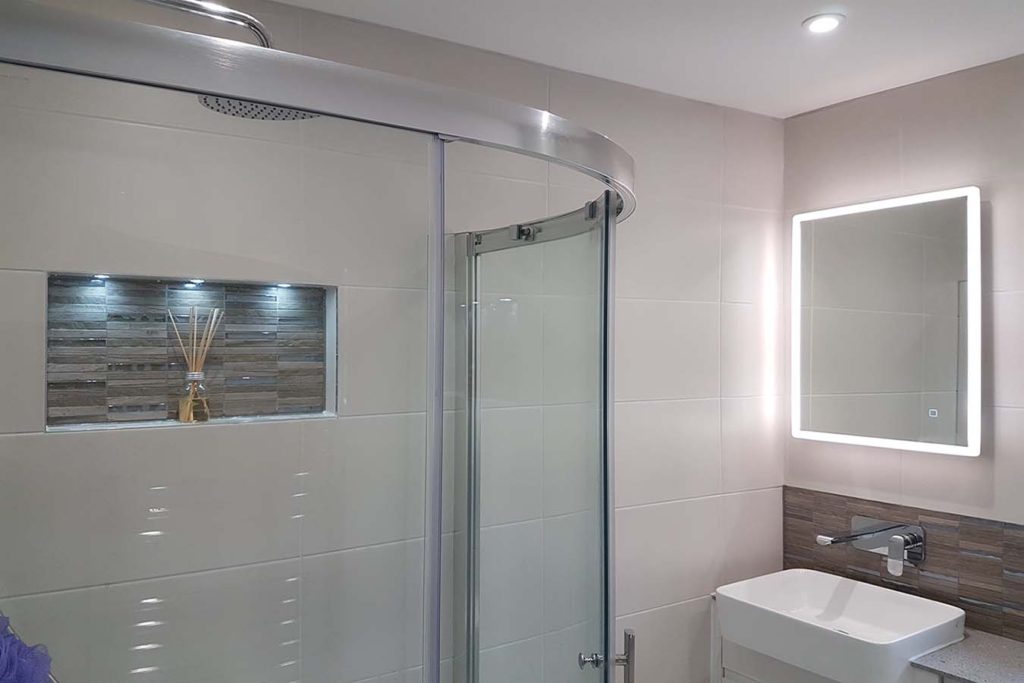 Choosing to install a shower tray and shower screen, rather than creating a level access walk in shower, can definitely save money on your new en-suite shower room in Romsey. Also the use of a low level shower tray can result in the finished floor height inside the shower being almost the same as the floor outside of the shower tray, as was the result in this lovely en-suite show room project in Romsey.

Time For a Change 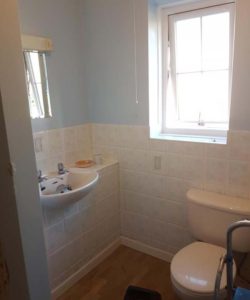 This en-suite had been showing signs of mould for a while and with bit of a mouldy smell too, one of the customer had already stopped using the en-suite completely. As a result they had both decided it was time to get this old shower room ripped out and a brand new modern en-suite shower room installed by Rhombus.

The property was built in the mid 90’s and this shower room was the same as originally fitted back then. There were signs of damp problems on the plaster work and wooden skirting board near the shower cubical itself but nothing major. Appon ripping it all out though a compltely new story became apparent. The reverse of the plaster board facing the inside of the wall was badly moulded and had obviously been getting damp far a long while. This completely explained the visible problems and the smell of damp in the room. The damp had also rotted a fair amount of the stubwork the plaster board had been in contact with.

The cause for the mould is nothing unusual. Back when this shower room was first fitted no form of waterproofing was applied to the plaster board before tiling. Nowadays tile backer board would normally be used especially if big tiles were being fitted, as plaster board can’t take a huge amount of weight safely. Not a great deal of water should come into contact with the tiles, but if it does, the grout is never intended to to be waterproof. And if water does start to get through, there isn’t any air flow inside the studwork for it to dry out. As a result the problem just gets worse and worse with the wood starting to rot.

This isn’t the norm unfortunately as you do still see fitters slapping tiles straight onto plaster board with no waterproofing or proper tile backer board. Their jobs done this way will definitely have limited life and it will only be a matter of time before the tiles start damp behind and possibly start to release. 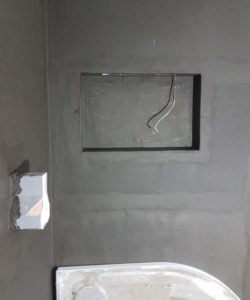 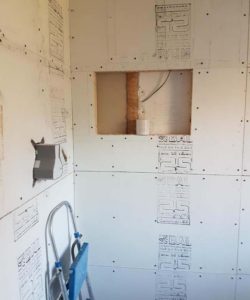 All shower cubical tiling we do at Rhombus is always fully waterproof with tanking solution behind, before the tiles go on. This way you can be sure there won’t be any damp smells forcing you to have work done later. A little extra effort at this stage ensures no issues in the future. The rotten stud work was all cut out and replaced as well, and a few adjustments made for a niche in the shower to be added. Cement based tile backer board was used to make sure good strength was present for large tiles and the niche hole cut out with wiring ready for LED lights. The whole area final slatheredwith a good coat of tanking solution, especially the inside corners of the new niche. 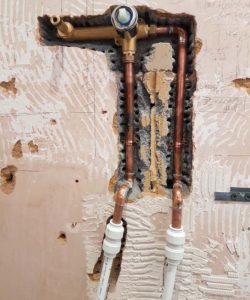 First job after ripping out the old is to get the floor up to see where the pipes are going. In most cases the pipe work needs to be moved around to fit the new items. But more importantly just to know where the pipes and electric cables are when drilling holes and screwing things down. Pictures and sometimes measurements as well are taken for future reference. In this project the existing waste pipe from the shower was running above floor level in a boxing and needed to be moved below the floor level. This is essential as the waste water pipe on a low level tray is below floor level but also results in a far cleaner overall finish.

New radiator and basin taps needed pipe work to be moved and also some chasing out of the walls, so the pipe work could be concealed behind the surface. once complete ply wood floor was screwed down and a hole cut out for the shower waste to go through. The walls were lined with tile backer board and the seems between board taped, then the whole lot painted with tanking solution including all the internal and external corners of the niche, as it was within range of the shower head and likely to get wet. 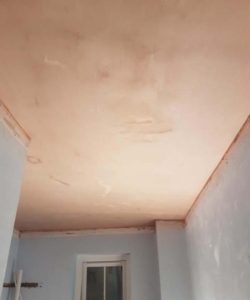 Also in the brief for this job was to remove coving and plaster board over the ceiling to hide the old artex. Then a skim coat over the plasterboard and holes drilled for new spot lights and extractor fan. Fire rated spot lights were fixed and a new more powerful extractor fan, as the old wasn’t sufficient. The new extractor fan we fitted to the rafters instead of the joists. The joists form part of the ceiling but the rafters form part of the roof outer skin, so any transferred noise from the fan would go into the wood work of the roof rather than the shower room ceiling. The reduced noise level and improved airflow were just what the customer wanted, they weren’t even aware it was actualy running at all until a ten pound note was used to prove the fan was active and strong. 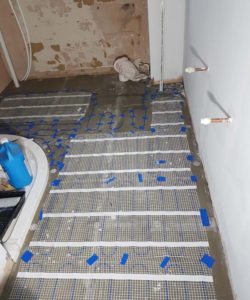 Insulation boards were cut and layed using flexible tile adhesive. Underfloor heating wire mat was then laid out and taped down. Screed was then used to give a nice flat surface before tiling over. The combination of all these layers brings the height not far off the same as the shower tray to result in ‘nearly’ level access.

This bathroom design had fitted cabinets like a kitchen, so this needs to happen after the floor is tiled, but before the walls. A bit of playing around with the plumbing again and fitting the work top, basin and toilet, and this stage is complete and wall tiles can be applied. 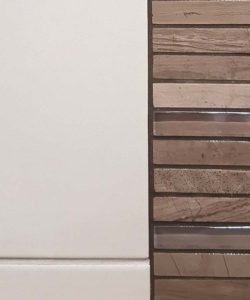 An interesting part of this design brief was the use of three different grout colours in the overall tiling. The floor and walls are quite often different colours, but this customer had requested one colour for the floor, a second colour for the main of the wall tiles and a third colour on the wall mosaic sections. This does add extra time to the job, it’s almost like grouting the walls twice, as the first colour needs to be left to fully dry and also be cleaned up before the second colour can be started, but the overall effect is gorgeous and well worth the effort.

With a good polish up of the tiling and a couple of different colour silicons to match the grout, all smoothed into the joints, the job was complete. The customer had gone from a tired old en-suite with a few mould problems, to a brighter and cleaner, brand new en-suite with a lot more space, cabinet storage and modern fittings. All this with a near level access into the low level shower tray, but without the extra outlay of complete waterproofing required to create a ‘walk in’ level access shower room.

The customers were both more than happy with the finished job Rhombus Bathrooms had created for them. Another job well done.