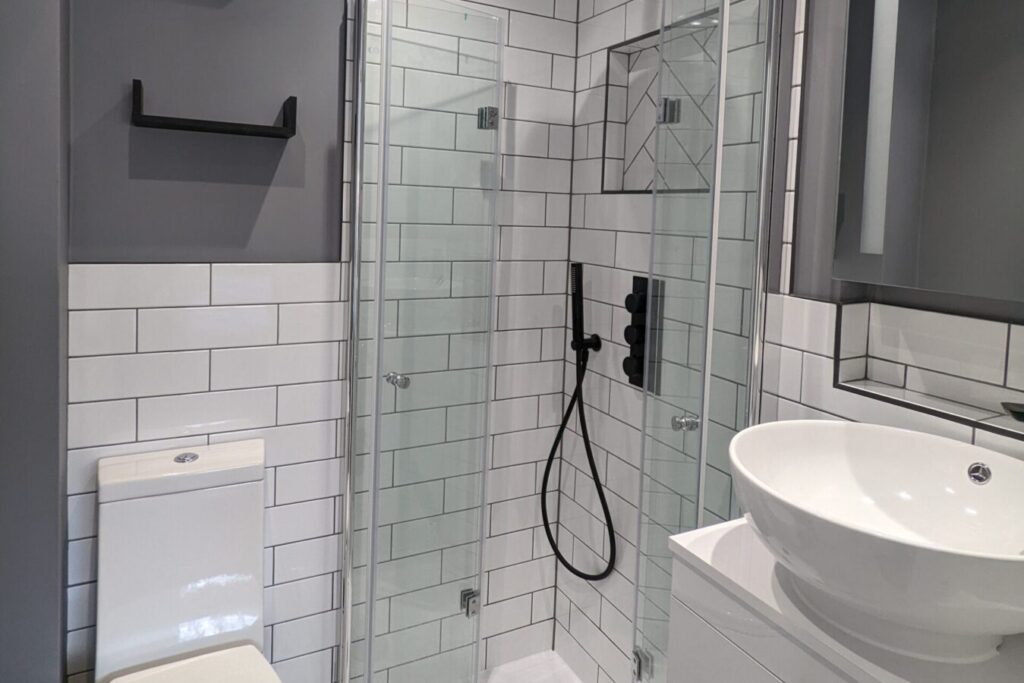 Black, white and grey very much seem to be the colours of the moment in 2022. Will we one day look back at these bathrooms and say to ourselves “What on earth were we thinking!?” Are they the new avacrdo and olive green suites we rip out on a daily basis to day? What i do know is that this looks stylish and modern at the moment, in fact it is this colour scheme I chose for my own bathroom. Maybe I’ll be looking back on these words in 20 years time!

This project had a few little surprises in store for us when the rip out was completed. We often say there are things you can never predict until you have ripped everything back to the bear room and this job underlines that statement!

The aim, as with most of our jobs, was to lower the tray down to floor level and remove the step in. There was a small boxing between the tray and the basin unit that was expected to hide the basin waste pipe, which it did, but that was not all! These houses, again a 1990’s build, have been squeezed in every way to get the smallest footprint possible, yet get the best from the interior. Some of the smaller 70’s – 80’s built houses we come across have large ‘stair boxes’ in the room above the staircase, where the room has been squeezed half over the stairs to maximise room size. There isn’t really much you can do with this large square apart from try and make a cupboard or feature out of it.

In this case the room was pushed slightly over the staircase but just enough that the high level shower tray and boxing for the basin waste could cover it. Clever way of making the room 70mm wider but this then scuppers the plans for a floor level tray, as these three top joists can’t be cut out especially as there were also water pipes tucked down into this gap. This can be seen on the 360 degree image below, in the far corner there are three small triangles of wood coming into the room at floor level.

On top of this the walls were made from compressed straw. This is sound proofing and insulating but a nightmare to fix to and chase out. Plus it’d been tiled twice before and each time the tiles are removed the walls get more and more destroyed. Unlike plaster boarded stud wall, you can’t simply repair the side that is in the room you are working on.

To achieve the floor level tray a stud wall had to be made to get past the top stair joists, thus loosing a bit of width on the room but at least giving the opportunity to create some inset niche features for the shower area and mirror unit. The waste pipe for the basin could also be run through this new stud wall removing any boxings that would have been needed otherwise.

Check out the ‘before’, ‘during’ and ‘after’ 360 degree images of the project below.

After rip out, notice the stair top joists peeping into this room in the far corner.

Stud wall with niches and plumbing.

All prepared ready to be plastered .

( If “Image Not Found” shows in place of any of the 360 degree images please try reloading the page. )