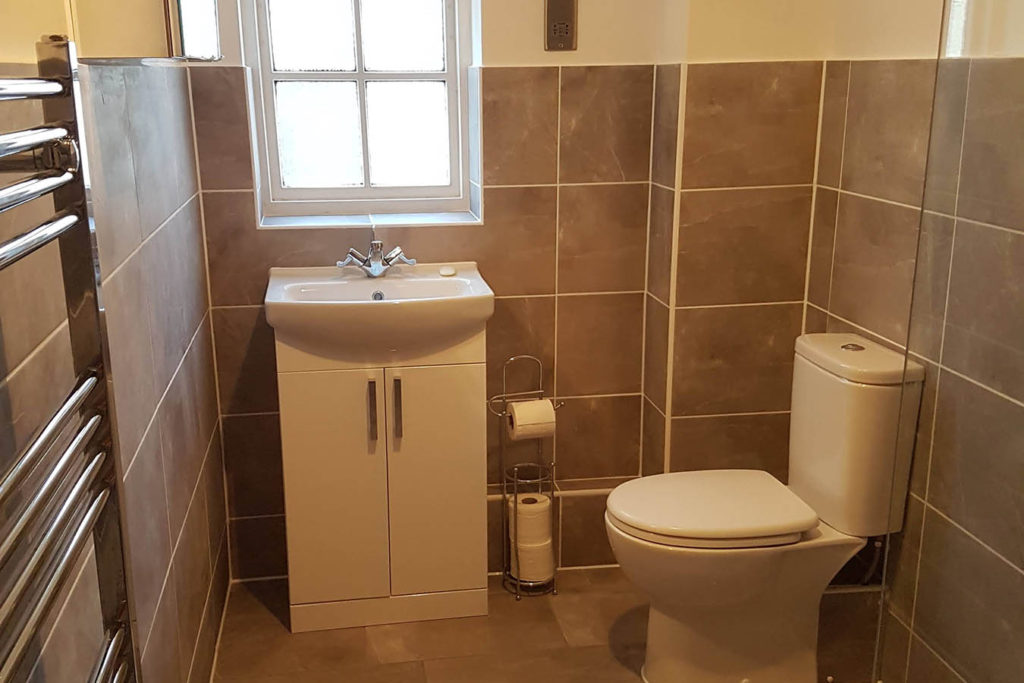 This was a rather tired old bathroom that hadn’t been touched since the 70’s and was badly in need to bringing up to date. The flat roof above had been leaking for some time in the passed and had recently been re-roofed. The ceiling had partly come down in one corner as can be seen from the pictures.

The property was owned by an lovely elderly gentleman who’s main need was to have the bath removed and replace it with a walk in shower. As the property was built some time ago the bathroom was actually of a decent size, unlike a lot of modern builds, and the plumbing for the waste water already ran below floor level. A nice large shower tray and same dimensions as the bath was make this customer life far easier on a daily basis.

At the same time, all the other main items were to be replaced with modern version, and the room to be three quarter tiled including the floor.

The old bath was cast iron and weight an absolute ton! There was no way you’d ever get this thing down the stairs with any thing less than 4 strong people and damaging walls and the wooden stairs (with 90 degree turn half way) would have been impossible to avoid…how they ever got the thing in there is anyone’s guess! When the bathroom was last updated in the 70’s they must have moved it about and worked around it, it certainly wouldn’t have been taken out and put back in. After burning out one grinder completely, the only way as you phone around and find a friend with a 14lbs sledge hammer! The bath was then smashed into small enough pieces to be carried down the stairs and our regular scrap metal man was called to come and collect it. Ear plugs are strongly recommended for this job!

The toilet was in a rather strange position nearer to the end of the bath that it was to the end wall for some reason. Maybe the last builder who fitted this bathroom had intention of putting a cupboard in that never happened. Plus the soil pipe had always leaked since it was done in the 70’s. The customer had corrected this problem years ago with some gaffer tape but as soon as we started bashing around this leak had returned with a vengeance. The toilet was moved into a new position of the customers choosing that suited far better, and the soil pipe was replaced to stop any future leaking.

The original waste pipe from the bath was already under the floor but the angle of drop to give ‘run off’ wasn’t good, at nearly level. Plus having been in since and nearly level at that, it was pretty blocked and wouldn’t the handle the increased flow rate required by the new shower and tray. So the pipe was completely replaced and joined in at a lower position to give extra slope on the run. This required access in from below by removing the boxing and a section of ceiling from the kitchen below. Flow rate now achieving the maximum possible ensures there wouldn’t be any problems with the shower tray over flowing. The floor was over boarded with 18mm ply to give it some strength as there was a fair bit of movement present and the floor boards were old and all over the place, so something needed to be done to flatten it all off before tiling. The over boarding of ply went under the entire shower tray foot print, and the tray was securely fixed down to this.

The walls in older properties like this are rarely flat or plumb, this was no exception. The wall adjoining the property next door bulged outwards in to the room at the top and then slopped way as it reached the floor. Levelling it would have been the best way forward but would have resulted in loosing nearly 100mm at the floor, pushing the shower tray further in to the room and almost up to the door frame. The decision was made to leave the walls as were and make the best possible of the tiling in the circumstance. The wall sloping away at the bottom isn’t the problem, where as tiling a bulge leaves slight lippage but nothing too obvious and the customer was more than happy with the results. The sloping away wall can be seen by the corner silicon line in the pictures.

Check out the ‘before’ and ‘after’ 360 panorama image of the project below.

Check out large versions of all the images below… 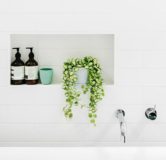