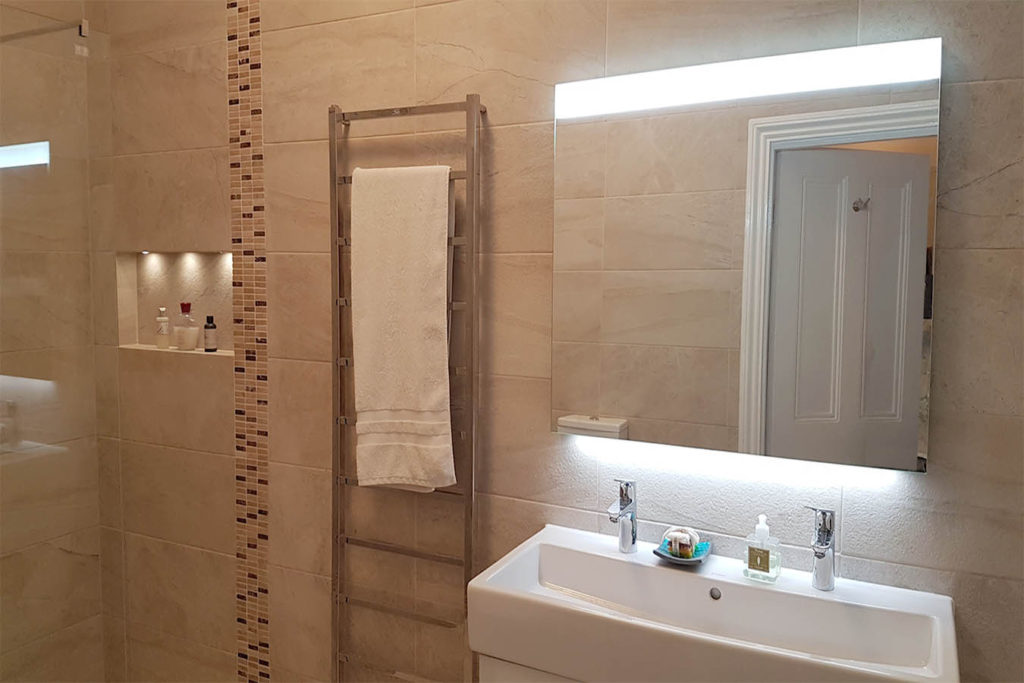 This was a nice little project to fit a new en-suite wet room into a house in Romsey Hampshire. It would appear the previous owner had rushed the existing en-suite bathroom to get a quick sale on the property. It had a whirlpool bath which was never used as it made so much noise and the tiles appeared to have been put up in a rush and were hanging off the wall in places, some ready to fall right above the shower end of the bath. Plus the bath panel was home made from an un-painted piece of MDF board which had started to mould on the edges. Couple this with dangerous electrics under the bath and a waste pipe that ran uphill, it was a bit like something from a Channel 5 TV show. Needless to say for our customer in Romsey it was time for the old en-suite ripped out and replaced by a nice new stylish wet room.

The tiles came off very easily, some straight fell off, and thick blobs of adhesive had been used to secure the tiles instead of a notched trowel. This rather bodging method helps lay tiling flat over uneven surfaces but doesn’t secure them well at all, especially as they were very large very heavy porcelain tiles. The plaster was loose behind them already so it was a surprise they were still up at all!

The house was built sometime in the 1800’s so the floors weren’t level and the walls weren’t plumb. The walls were lath and plaster of varying thicknesses and the stud-work was varying distances too. The walls were stripped bare of all plaster and laths, revealing a closed off door the customer was completely unaware of. New stud work was fitted between the existing studs but at the correct distances. The studs were also set at the correct distance back from the surface so waterproof tile backer could be fitted yet still remain flush with the rest of the wall surfaces and coving. The floor was ripped up, new plumbing set in place and new 25mm plywood floor put down. A square was cut out for the shower former so everything would be at the same level before tiling. Lastly the plumbing and flow rate was tested before everything was glued and screwed down.

Also in the brief for this job was to reduce the sound from next door. The solution to this was to make a false wall from stud-work with two layers of overlapping plasterboard, filled with insulation. This also allowed for all the plumbing for the sink to be hidden and wiring for a niche with LEDs.

As with all level access wet rooms, the whole area of the shower itself needs to be waterproofed. The underfloor heating also works better if insulation is added to the floor before the heating mat goes down. This sends the heat upwards into the tiles and floor above rather than heating the air in the void between the wet room floor and the ceiling below. As waterproof tile backer board was used for both walls and floor all that needed to be done was to waterproof the joints by taping them up and coating them with rubberised tanking solution. No water can then pass this layer. Heat mat can the be laid, self levelling screed poured on top to protect the heat mat then, once dry, everything can be tiled on and grouted.

So that the electrics would be up to present regulation a lot of it needed to be changed and updated. There were a few dangerous bits that needed to be completely removed and as the walls and floor were up even a couple of wall the sockets were refitted, rewired and plastered in. All the electrics had be be re-routed
through an isolation point and as an extra finishing touch the LEDs in the niche were wired to switch from the infrared motion sensor on/off switch of the new LED mirror. So the main ceiling light and extractor fan would switch and dim from the main switch on the outside of the bathroom, and at night the toilet could be used without the extractor fan being triggered, by entering the bathroom and waving ones hand under the mirror to switch on the more subtle light of the mirror and niche LEDs.

Due to the age of the house the bathroom was a fair size bigger than the normal bathroom in a modern house plus the ceiling was higher than normal at 2.9m to the bottom of the coving. This meant the tiling was quite a big job as it was to cover all walls. Once grouting was complete and everything polished and water repellent sealed, it was time to start fitting the furniture.

The new basin came with large rawlplugs and bolts but didn’t look nearly enough to hold up a sink of this size when full of water, as it wasn’t to be supported from the ground at all, just hung from the wall. Although the sink had four fixing points available, it only came supplied with 2 fixing bolts which were considered insufficient by our staff, especially as the walls of the building this age are like butter when drilled into. So, as with most item’s fixings, they were binned in preference of a far better method.

To fix the sink holes were drilled through the tiles and stud-work and right into the wall. Long bolts were then resin welded into the wall behind the stud-work, using all four holes and the sink was then fixed to these with no danger of ever coming loose. Taps and waste then plumbed in along with the toilet and the shower fixings.

Lastly the shower screen was fitted, the mirror, the radiator and with some silicon sealant in all the joints and edges the job was complete. A beautiful level access walk in show / wet room, no bath to have to stand in anymore for a shower, no tiles hanging off above the customer’s head about to fall any minute.